There are times when a long-simmered braise is food for the soul. When the whole browning and deglazing and waiting and reducing brings a comforting rhythm to the day.

And then there are times when you’re craving that fall-apart tender meat that’s shot through with flavor, but you don’t have time for all the steps. That’s when I turn to what I call “dry braising*.” Here's how to braise this simple way. 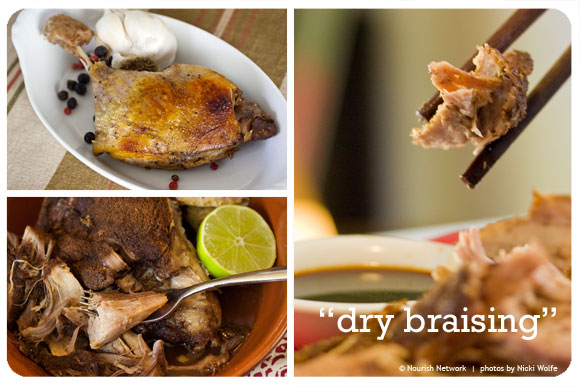 If you’ve ever made Carnitas de Lia (and I know quite a few of you have) you’ve already experienced dry braising. You’re essentially rubbing a cut of meat with a spice and salt mix, enclosing it in a Dutch oven, and cooking it at a low heat for a long time. That’s it. Mix and rub and walk away until it’s done.

Technically, this is not braise, since it doesn’t involved browning and uses no additional liquid. Nor is it roasting, since that involves dry heat and uncovered meat (Sally Schneider, author of the fabulous Improvisational Cook, highlights a similar technique that she’s dubbed “close roasting”). It’s really somewhere between the two.

Dry braises are even more versatile than their traditional cousins. Carnitas de Lia, for instance, could star in quesadillas, a Mexican scramble or tortilla soup. The five-spice pork below is incredible crisped up in a stir fry with bok choy or added to udon soup, or wrapped in scallion pancakes with a dab of plum sauce. And our Revelationary Duck Confit … don’t even get me started.

This technique almost defies actual steps, but for those of you who would like the ease of a 1-2-3, here they are:

1.     Make your spice mix. Let your imagination run wild here. Ancho and chipotle chile powder work well with South-of-the-border inspiration. Chinese five spice, star anise and coriander are nice Eastern-leaning choices. This doesn’t have to be complex or precise (think of it as playing with watercolors and seeing what comes of it). Just stick with these general proportions: ½ to ¾ of a teaspoon of kosher salt and 1 teaspoon to 1 tablespoon of spice mix (depending on the assertiveness and heat of its components) per pound of meat.

2.     Rub. Rub the spice mixture into all the little nooks and crannies of the meat. If you’re using a boneless roast in a net — like a pork butt (pork shoulder) or leg of lamb — take it out, rub spice mix onto every exposed crevice you can reach, and then stuff it back in the net (or tie it back up … or just shape it into a free-form roast).

3.     Cook.  Preheat the oven to 275 F, place the meat in a tight-sealing Dutch oven and cook for roughly an hour per pound of meat (meat should be fork tender).

Oh, and did I mention that dry braises freeze super well? If you’ve got a window of time when you’ll be at home, cook and freeze and get a jump on the holidays!

* Yes, there is a Chinese technique called dry-braising, but it's a different one than the technique I laid out here.

What to Eat to be Nourished, and How to Make it Happen (in Real Life)

Watch the video and download the customized action plan to take the first step on your nourish evolution now.
WATCH NOW

Goes with Everything Grilled Vegetables

Italian Migas with Chard and Sausage

These cutlets are a simplified version of chicken Milanese, using a flavorful schmear of Dijon mustard instead of an egg and dredging the chicken in one coating of bread crumbs.

This simple side dish adds Asian flair to any meal. These sugar snaps are delicious hot out of the pan or at room temperature for lunch the next day. Mirin is a sweet wine made from glutinous rice that’s a staple of Japanese cooking.

This is based on a bar snack Alison spotted while, well, sitting at the counter at a local wine bar watching the bartender turn out quick pizza-like snacks with lavash (a type of Armenian flatbread), a variety of toppings and a toaster oven.