Yes, I Have Chickens

I'm going to ‘fess up. I've been holding off telling you about my chicks (who are now nearly full-grown chickens). And you know me. You know I feel compelled to forge right past procrastination as an excuse and look for the deeper meaning behind the delay. So I'm going to peck away at my thoughts on this page. 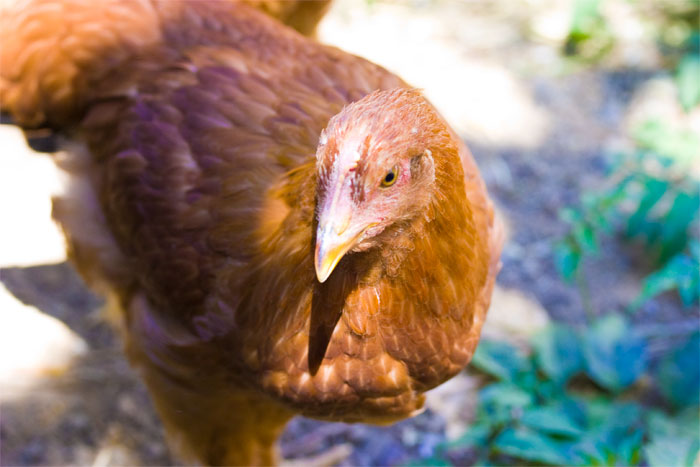 I think at the root of my hesitation is the fear that people who know and love NOURISH Evolution for (rightly so) being a place they can feel empowered and inspired to make nourishing meals in real life will feel like I've gone off the deep end. That when I say “I've got chickens!” they'll assume a tacit suggestion that if you don't have chickens too then, dog gone it, you're just falling short on the nourishing front.

So let me state plainly that this just ain't so.

There is a fundamental way of eating that I believe everyone can and should benefit from, and that is the core of NOURISH Evolution. And then there are sidebars to that which are more hobbies or interests that are fun and great, but that aren't essential to being nourished day in and day out. These are things we may choose to pursue when we have the time or an opportunity presents itself. Things like canning, or fermenting, or raising chickens or other animals. And I think it's important to allow everyone the freedom to pursue–or not–these hobbies without feeling pressured either way.

So now that I've got all that off my chest, let me tell you about my chickens! Meet Pipecleaner, Butterscotch, Minnie and Speedy (of course we named our chickens!), who we share with our neighbors Jessica, Sebastian and Rosalie. 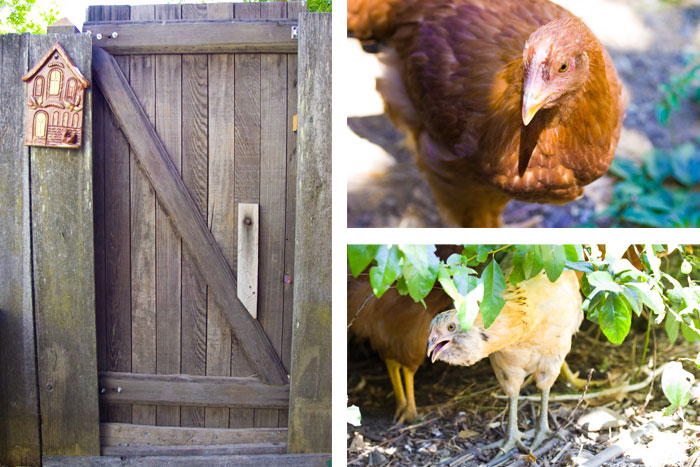 I have always wanted chickens. At least, ever since I lived in Greece. But we just don't have enough space in our little spot. So when Jessica asked if Noemi and I wanted to go in on chicks together, which we would keep in their yard, I was over the moon. Our two families tromped off to Garrett's and picked out our chicks–two fuzzy yellow Buff Orpingtons and two Ameraucanas (yes, the ones with the blue eggs!). We let them loose in a big trough set in the shower of Jessica and Sebastian's cottage, which backs up to our back yard, and Sebastian and Christopher tore down a couple of fence boards and put in a gate. Noemi and Rosalie ran around, Jessica and I mooned over our fuzzy babies, and the whole affair rolled into a stellar dinner that featured a crazy grilled asparagus and mango salad, and Asian pork ribs. It was magical from the get-go.

Six weeks later, it was time to let our girlies roam. Sebastian built a little chicken coop out of salvaged wood, Jessica and I built a chicken run, and our little chickies continued to grow. They were precious. Early on, they'd all huddle together in one of the nesting boxes at night, like a big globe of fuzzy feathers. Then, one night, I heard them chirping when I went out to close them up in the coop. I didn't see them in the box, but clearly heard their little peeps. Then an upside down head came into the beam of my flashlight and I saw eight little clawed feet behind it clinging to a dowel rod. Just like that, they'd discovered that they're meant to sleep on their roosting bar.

We've had them now for about two and a half months and, as much as I'm looking forward to the eggs–which will show up when they're between 4 and 6 months old–I'm a bit surprised by how thoroughly I'm enjoying the mere company of “the girls” (as are Noemi and Christopher … and even Dad!). Last night Butterscotch came up to me (she's the most affectionate one of the lot) and nuzzled my leg while I rubbed the top of her beak and chest. They're funny, precocious, sweet and an utter delight.

So I hope I have your permission to share my feathered journey here with you, without making you feel any way pressured to do the same. In the meantime, tell me, are there any “food hobbies” you're dabbling in–or want to? I'd love to hear …