Heritage Meat and Poultry: Eat it to Save it!

I dined on a Mulefoot pork chop at Cochon restaurant in New Orleans with a rush of pleasure, anxiety, and guilt. If this hog breed is endangered, should I be enjoying it so much? I thought. But in truth, the pork is what brought me to the restaurant; by eating the endangered breed, I was actually helping to save it. 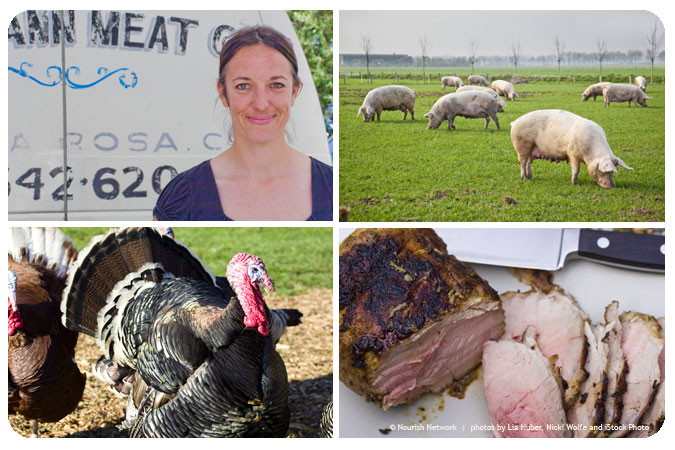 The Mulefoot is just one threatened breed listed by Slow Food USA’s Ark of Taste and the American Livestock Breed Conservancy. Both organizations seek to preserve endangered foods, including vanishing breeds of pigs, turkeys, cattle, and poultry. For example, did you know over half the swine breeds listed in the USDA Agriculture Yearbook of 1930 have disappeared?

Once modern, large factory farms emerged in the 1920s, pigs, turkeys, chickens and cows were bred to be docile and mature quickly. Animals were moved from pastures to crowded feedlots and fed cheap food that often made them sick (which led to widespread antibiotic use). And stressed animals on unnatural diets produce meat that is inferior in taste and quality. The good news is, conservation, biodiversity and superior taste are all part of the re-emerging food values inherent in heritage breeds.

Heritage breed farmers like Lisa Richards, owner of Mack Hill Farm in Southern New Hampshire, practice environmentally sound biodiversity. She and her husband raise Tamworth pigs–hardy foragers prized for lean, fine-grained meat. The farm is also home to sheep that yield milk for making yogurt and cheese (as well as whey that feeds the pigs), and chickens and Midget White turkeys that pick through manure in the pasture, breaking the parasite-bacteria cycle so the pigs can safely root the manure back into the soil as they forage.

This natural approach means that heritage breeds take longer to reach market weight and require pasture to roam and forage … which costs more than raising them on a feedlot … which means farmers can only raise heritage breeds if there is a market for them. Which brings us full circle.

As my Cochon experience demonstrated, chefs are a crucial link in the farm-to-table journey. Heritage breeds have long enchanted chefs, who are introducing diners everywhere to them. Chefs and consumers swoon over heritage breeds’ distinct characteristics, like high intramuscular fat and rich, fine-grained meat.

But diners are sometimes stunned at the prices of heritage products, which can cost $5-$10 or more per pound (reflecting a truer cost of food production than their conventional counterparts). Nonetheless, there are ways to incorporate heritage meat and poultry into your food budget.

Ask for it. I discovered heritage pork (a Tamworth-Berkshire cross, labeled only as “fresh pork shank”) for $3.99 per pound at my specialty grocer. Costco now carries D’Artagnan, which represents sustainable, humane small family farms and cooperatives. LocalHarvest.org can help you find farmers who sell directly to consumers, at farmers’ markets, and through CSAs in your area.

Eat less meat. The average American consumes 15 cows, 24 hogs, 900 chickens, 12 sheep, and 1,000 pounds of other assorted animals in their lifetime, according to the U.S. Department of Agriculture. That‘s a half-pound of meat per day–almost twice the USDA's recommended 5 ounces of lean protein for a 1,800-calorie daily diet.

By consuming smaller portions of more heritage meats, buying from farms or specialty grocers, and demanding heritage breeds at your mega-mart, you can help improve your family’s health, the environment, and breed diversity. As the Ark of Taste’s motto says, “Eat it to save it!”

The Economics of Local Food

These days, you can buy local food in many places: farmers’ markets, CSAs, even the supermarket. Which is the best deal for consumers and farmers alike? 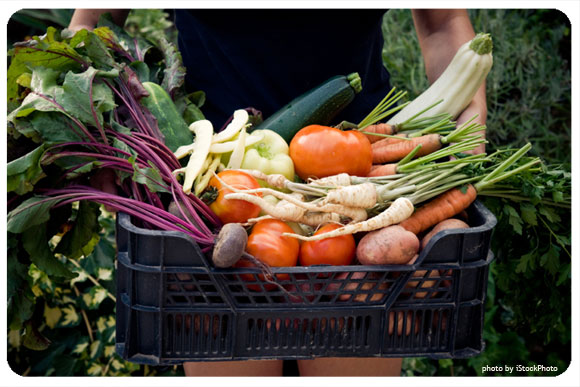 CSA 101: What is Community-Supported Agriculture?