This weekend, I was flipping through the latest Food and Wine when something decidedly unappetizing caught my eye. “Be An Uncompromiser!” the ad’s headline shouted, and in the text below: “Enjoy the Best of Both Worlds. The makers of Pepcid Complete understand the importance of never having to choose.”

Never having to choose? Hm. I see things a bit differently.

Whether we like or not, I believe our lives are an endless string of choices and that our fate is largely the ripple effect outcome of those choices. I’d even go so far as to say that our choices—whether what to make for dinner or which house to buy—are what define us, and I can point back to the precise moment that cemented my theory.

Ten years ago, on our way home from an extended road trip to Costa Rica, Christopher and I made a stop in Antigua, Guatemala. From the first rumble of cobblestone beneath our tires we were smitten with the town. Quaint earthen buildings in playful colors like turquoise and watermelon pink line the streets, and bougainvillea covers ruins of mansions and palaces and cathedrals. All this in the shadow of three stunning volcanoes. 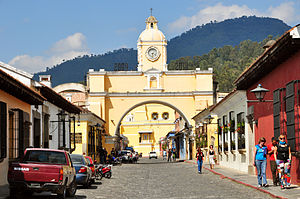 That day, we took a walking tour of the town with Elizabeth Bell. Under the eaves of a centuries-old municipal building, she told us that nearly 70% of Guatemalan children don’t attend school, simply because the books and uniforms (which are mandatory) cost what would be the bulk of a family’s income.

That night, on the way back from dinner, we passed a woman with her three children begging outside our inn. Normally, we’d walk by with a wrinkled brow or, if we were feeling generous, give some money. But that night, for some reason, Christopher got down on the sidewalk and played with the kids. Their mother and I laughed so hard we were leaning on each other’s shoulders as the kids tickled and climbed all over the giant stranger.

A few hours later, we were awakened in the middle of the night by the innkeeper pounding on our door. Our truck had been broken into. We ran out, half-awake, and found that someone had broken the window, reached in and grabbed one bag before being scared off by the alarm.

The rest of the day was a blur. We spent the morning filling out forms in the police station and the afternoon driving through Guatemala City searching for someone to fix our window. But what stands out for me is our lack of immediate reaction. We could have cussed out the innkeeper. We could have accused people on the street. We could have written off Antigua, and Guatemala altogether, and headed the next day for the Mexican border. But, for some reason, we didn’t.

It turns out that Christopher and I were both thinking the same thing: the junk in our “catch-all” bag—the one that had been stolen—was worth enough to put a family of children through school for a year … children like the ones Christopher had been playing with the night before.

So we made a choice. An eyes-wide-open, go against the norm choice.

We decided to return to Antigua and, rather than try to recoup what had been stolen, give an equivalent amount back to the country and the people that had touched us so deeply in such a short period of time. Looking back on that choice now and how profoundly it has shaped my life still stuns me. If, 10 years ago, Christopher and I had “not chosen” and just gone the usual route of angry indignation, my life now—and the lives of at least three others—would be nowhere near as rich as it is today.

The Rest of the Story

We remembered that Elizabeth had told us about an organization on the outskirts of Antigua that helped impoverished children and their families through education, skills training and health care with the support of sponsors and we thought we’d start there. When we got to the campus I expected to see shame in people’s faces, as we tend to see here when people are standing on a welfare line. But it was just the opposite. These people exuded pride and strength and resolve.

As we learned more about the program, it made sense. Common Hope wasn’t about doling out to those in need—nearly everyone in the country was in need. It was about empowering those seeking to change their circumstances and holding them accountable during the process. We signed up that day to sponsor Rene Antonio, a 6-year-old boy being raised by a single mom, and met him and his family the next day. There were a lot more laughs, and hold-my-gaze-and-search-my-soul silences, and hands squeezed tight that expressed whole-hearted gratitude. Rene truly became our godson and our families extended parts of each other.

That was ten years ago. Rene is now a handsome 16-year-old boy who, with his mother’s and grandmother’s support and sacrifice, is still in school and thriving. (He wants to be a doctor, and we’re confident he will be … and you can bet we’ll be at his graduation!). We were there 3-1/2 years ago the day his family’s house was built; a one room cement home they earned through many hours of sweat equity on the Common Hope campus.

Through the years, our passion for the people of Guatemala grew. Five years ago, we committed to support a young woman named Mayra, the daughter of the village leader and a force to be reckoned with in her own right, through college. People tell us how lucky she is, but truthfully, I’m the one who feels lucky; I often feel carried by Mayra’s persistence and determination. To pursue her dream, she has to deal with racism, pre-dawn walks down a mountainside to the bus, having to balance studies with helping family grow food for their sustenance AND caring for her son on a daily basis. In my life, Mayra and Rene are more than inspirations; they’re tangible reasons to get over whatever I’m brooding about and take one more step towards my goal.

The greatest ripple effect of that day’s decision, though, came three years ago in the form of Noemi de Leon Huber … our daughter. When we decided to adopt, there was not even the inkling of a question that it would be from Guatemala. Three years ago today, Christopher and I returned to Guatemala a fourth time … to bring Noemi home.

I’d love to claim that I’m a naturally saintly person who always makes compassionate, giving decisions like the one ten years ago. But I’m not. And I don’t. But the power that this single choice has had in shaping my life has inspired me to try to be more thoughtful in my choices more often.

What does all this have to do with NOURISH Evolution?

Everything. Because if we talk about reframing our view on fats, but still think eating “light” versions of mayonnaise and peanut butter will make us healthier, then it’s all for naught. Because if we suggest smart sustainable seafood but you feel, deep down, that your decisions really don’t matter anyway, then why bother? Deliberate, purposeful choices are at the core of NOURISH Evolution—what we write about, why we write about it and who we try to be.

So, to the “Makers of Pepcid Complete,” here is my case for choosing:

The maker of NOURISH Evolution understands the importance of being deliberate with your choices, and of being aware that the ripple effect outcome might well outweigh the scale of the original decision. We realize that we always have to choose, whether we’re doing it purposefully or not, and we try to make each choice be one that makes us better people and leaves the world a better place.

Which view do you live by? … It’s your choice.